A Swing Jazz Musical Honoring the Women of WWII

It's more than a musical... it's a treasure!
- Michael Hood, President of the National Theatre Conference

The songs Karen Houle Johns writes are so poetic and narrative, it appears that she has added a few more pages to the American Songbook of jazz standards.
- Ginny Kennedy, NPR, Huntsville, Alabama 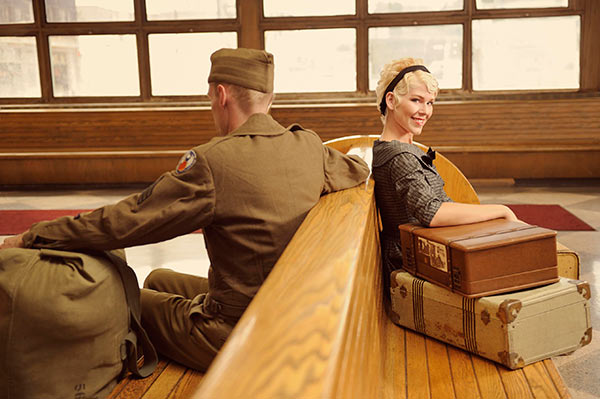 The attack on Pearl Harbor, Hawaii, December 7, 1941 - a date which will live in infamy - launched a mass enlistment of the American men into the armed services. Upon their deployment, an unprecedented number of women mobilized into an enormous labor force focused on and dedicated to the war effort. 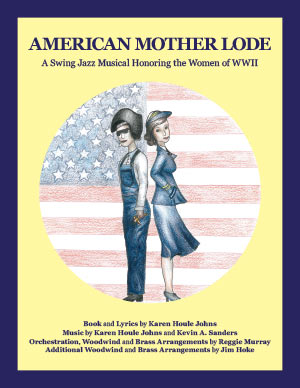 American Mother Lode is a two-act swing jazz musical created in honor of the women of World War II. The key players in this story are six women: three Navy WAVES and three shipyard welders. In contrast and comparison with the supporting male cast, these strong archetypes represent the larger female demographic of that period. With the ratification of the 19th Amendment of the US Constitution on August 18th, 1920, women were granted the right to vote, and to that end and perhaps without realizing it, the World War II female work force catapulted the Women's Rights Movement into the future.

The storyline spans from 1941 to 1948 and signifies both the progress and the struggle women experienced historically, culturally, and socio-economically. The three Navy WAVES officers are affluent college graduates and their co-stars are industry trained welders. Though they each hail from various regions of the country and different social strata, the women forge an endearing friendship that chips away at class divisions, and pulls gender equality under the magnifying glass. Such polarizing concepts are lyrically addressed in several musical numbers, including “The Admiral’s Daughter,” “I Love a Stranger,” “I Speak Woman, You Speak Man,” “We Don’t Need No Dames Here,” and “Woman’s Work.”

Meet the Navy WAVES: Officer Margaret Benning is a striking, confident Bostonian daughter of a retired Navy Admiral who disparages her break with convention including her marriage to a Southern U.S. Army Captain. Officer Evelyn Reynolds is a sophisticated, daring debutant from Baton Rouge, Louisiana. She exudes the charm of Vivian Lee and the sass of Mae West rolled into one. Officer Deloris Doyle—aka “Del”— is a brainy, book-smart New Yorker. She may have been the sure-footed class valedictorian, but she’s admittedly awkward in the social scene.

Meet the Women Welders: Wanda Schimanski is a daughter of immigrants, the wife of her childhood sweetheart and the mother of their two daughters. Her impeccable work ethic and enthusiasm burst forth in the show-stopping number “Wanda the Welder.” Marnie McNally is a spunky dancing-darling whose ultimate wish is to get married and settle down, but in the meantime, she’s a pistol with a welding torch. Lavonne Peyton is the loyal go-to gal and the glue that holds them all together as she waits faithfully for her husband’s return from war. From the opening curtain to the last note played, we laugh out loud with our war-worker girlfriends but we also cry with them.

AMERICAN MOTHER LODE is a soundtrack of World War II in celebration of the 1940’s big-band swing and jazz-pop culture. With jitterbug crowd teasers like “Soldier Boy Christmas” and “Carry Me Away,” the AMERICAN MOTHER LODE musical encapsulates that romantic era, beckons the baby-boom years, and foreshadows the ever-increasing plea for equality to all generations, tying the past to the present and beyond.

Published by Vital Force (ASCAP) and produced in Nashville, this double CD album is a studio-recorded performance of the AMERICAN MOTHER LODE musical score. It is state of the art quality and includes some previously released songs that hit Top 10 and Top 40 Jazz Charts. Specifically produced to accompany the musical score and libretto in aid of live production teams, it is not available for retail sale. (Click on image)

AMERICAN MOTHER LODE is the ideal production for large, medium or small theatres, touring companies or troupes, repertory, community, or academic theatres, etc. The scenes are strategically designed so that a talented cast as small as ten (10) can successfully perform all twenty-six of the main and supporting characters. Likewise, musical scores are available for ensembles ranging from a full jazz orchestra to a small jazz trio and any size combo in between. As an alternative to live band/orchestral accompaniment, studio tracks of the entire musical are also available. 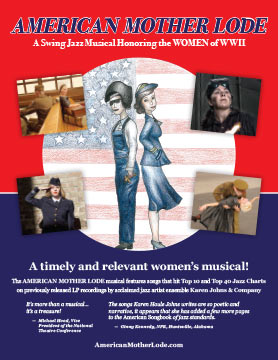